Archives are full of surprises and there’s nothing quite like the thrill of finding a hidden gem! While searching through the library’s ephemera collection to answer a reference question on an unrelated topic, a box of advertisements caught my eye because the label had G. Fox & Co. on it. Unbeknownst to me, the library has a whole box of G. Fox catalogs and a folder of other interesting materials such as a Charga-Plate (the old version of today’s credit card) and a pocket photo album. What really caught my eye, however, was the Connecticut Room menu from Friday, October 17, 1947!

This menu is a wonderful reflection of its time! Inserted in the menu is a small slip of paper that states:

“In compliance with the President’s request for conservation during the food crisis, G. Fox and Company will

This was in response to President Truman’s address about the world food crisis, the first presidential address to be telecast. It’s pretty amazing to see what kinds of information can be gleaned from a menu.

In the Koopman Family Collection, we also have a Connecticut Room menu; this one from Tuesday, October 5, 1965 and it’s really quite interesting to compare and contrast the two menus, from the food that was served to the difference in prices. 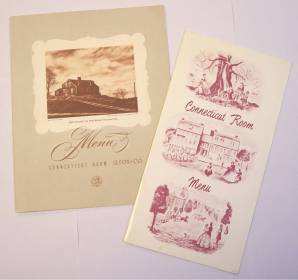 In 1965, the prices for a cup and a pot of coffee had not changed, but Auerfarm Pure Guernsey milk had increased to $0.15 a glass.

One of the luncheon suggestions in 1947 was: “Fried Filet of Sole with Tartare Sauce in a Lettuce Cup [with] Whipped Potato and Buttered Green Peas,” which you could purchase for $0.85.

By 1965, the Connecticut Room menu included daily suggestions and a chef’s special. On this particular day, the chef’s special, which was available for $1.10, consisted of “RICE CROQUETTES with a SNAPPY CHEDDAR CHEESE SAUCE served with a Chilled Tomato and Lettuce Salad, Petite Soft Roll and Butter, Tea or Coffee, Choice of: Apple Crumb Square, Ice Cream or Sherbet, Chocolate Blanc Mange with Whipped Cream and Almonds, or Fruited Jello with Whipped Cream”

While the menu items themselves may have changed over the years, the basic menu stayed pretty much the same with offerings like sandwiches, salads, a list of luncheon suggestions, and an extensive selection of desserts.