A very nervous potential donor walked in the door at CHS carrying a treasured scrapbook. He doubted if we would be interested, but took his chances. Well, I must have spent close to an hour with the donor oohing and aahing over this scrapbook. It was created by Rose Chorches Gold, an employee at Silent Glow Oil Burner Corporation of Hartford and the donor’s father’s cousin. Rose started the scrapbook in 1940 although some images date from 1937 and focused on the employees of the company.

Silent Glow produced oil burning kitchen stoves, furnaces, and portable styles of oil burners. An advertisement in the December 1, 1930 Lewiston (Maine) Journal claimed Silent Glow had created the market in range burners and were a leader in the industry in general. During World War II, the company president, R.M. Sherman, also head of the burner industry’s association, promoted conservation in a program entitled “Save for Defense”. Sherman cited the need for fuel conservation by adjusting burners to work more efficiently, keeping the temperatures lower, and installing insulation. (Sounds very familiar, doesn’t it?) Rose has a number of articles from newspapers and magazines that illustrated Mr. Sherman’ role at a national level.

Hartford Courant story about Oil Burner’s Efficiency is Fuel Saver, with a button bearing the logo “Save for Defense” from the oil burner industry, 1941. Ms 101680

In addition to documenting Silent Glow’s leadership in the industry, Rose also kept track of those employees who were drafted or entered the service. In the picture below, she lists men who joined or were drafted into the Army and Marines. Other men who entered the military sent post cards or Rose cut out stories about them from the newspaper. So the list of men is not complete.

This page, entitled “Called to Duty” listed men who had joinged the military. John Deluca, Nick Suzick and Jake Shannon were drafted into the army, Ronald G. Hopper enlisted and was wounded in action, and Joe Julius enlisted with the Marines. Ms 101680

Rose’s scrapbook is a great snapshot of this company in the years leading up to the war and through to 1942. She includes employees at work and at play and in most instances has provided identification for people in the pictures. Some she cut out like paper dolls. One gets the feeling from the scrapbook that the company was like a big family. If you want to see this wonderful scrapbook, please ask for Ms 101680 when you come to the Research Center. 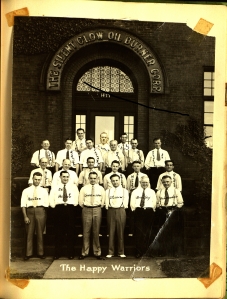