The latest exhibition to open at CHS is a selection of items woven by members of the Handweavers’ Guild of Connecticut entitled Time Warps: Textiles from Today’s Weavers. 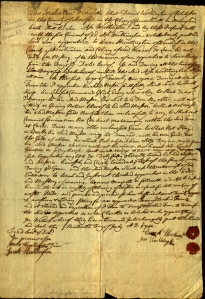 Asa Worthington was apprenticed to learn the art and mystery of weaving. Ms 73511

I decided to go on a hunt in manuscripts to see what we had related to weaving. I found any number of account books in which individuals, both men and women, paid for goods from merchants by weaving cloth. But the real find was an apprenticeship document and directions for setting up a loom.

In 1742 Asa Worthington of Colchester was apprenticed by his father to Isaac Huntington of Norwich to learn the “art, trade or mistery [sic]” of weaving. Asa’s age is not given, but his apprenticeship was to last until he turned twenty-one, and the agreement stipulated how he had to behave during that time: obeying orders, not harming his master, etc. I imagine one can learn weaving today by being an apprentice but not with a legal document that seems as strict as this one.

Asa Hungerford’s directions for setting up a loom to weave satinette. Ms 37053a

The other document provides proof, if it is needed, that one had to learn a great deal to be a good weaver. To the uninitiated, the drawings are nearly impossible to decipher. This page has Asa Hungerford‘s directions for setting up a loom to weave satinette, while on the verso is directions for kersey. Some of the terms are vaguely familiar: treadle, cards, harnesses. It is the “code” for how you thread the harnesses to get different patterns where the mystery comes in!

These and other manuscript resources are available for you in our Research Center.