As the early days of summer heat up and with Father’s day right around the corner, our thoughts turn to outside pursuits. Hiking, swimming, and fishing are just some of the activities Nutmeggers have enjoyed through the generations.  In 1927, a “monster” Lake Trout was pulled from Lake Wononscopomuc in Lakeville, CT. Malcolm D. Rudd was a very avid fisherman.  Malcolm, his brother, Charles, and their friend Floyd Jennings enjoyed annual fishing trips from 1901 to the 1930s. They founded a club which they christened the Oh Yes and Oh No (O.Y. and O.N.) Club. For each year’s fishing trip, Charles recorded their catch and a description of the trip in a journal. They also took numerous photographs which illustrated their accommodations, the landscape, their conveyance, and, of course, their catch! When I discovered photographs of an exceptionally large fish in Rudd’s papers, I assumed he was the lucky fisherman. The envelope containing the photographs was labeled “Lake Trout caught Aug. 1927” and “Pictures of monster lake-trout caught at Lakeville Aug. 1927.”

In addition to his diaries for the O.Y. and O.N. Club, Charles kept personal diaries from 1898 to 1949. I retrieved his diary for 1927 from the archives and eagerly turned to August.  With each day’s entry I read, I became more disheartened as I could not find an entry for the “monster lake trout.” Surely if Charles, Malcolm or Floyd had caught the fish, Charles would have noted it in his diary. After thumbing through all of August, I noticed that there were newspaper clippings inside the front cover. Rudd had saved three clippings about the fish, and the one from the Lakeville Journal was titled “New Yorkers Capture Monster Lake Trout.”

Massive lake trout taken from Lake Wononscopomuc. This record has stood for 86 years.

Reported on August 11, 1927, the trout was caught by William P. Hall of Rye, NY. Hall was “an experienced fisherman and on this occasion used a copper braided line with a silver soldier spoon.”  Hall was out on the lake his friend John S. Campbell and Campbell’s wife. They had been on the lake about a half hour, when Hall had a strike on his line. After a 40 minute struggle they finally managed to land the trout. The monster fish was 38 ½” long and 29” in circumference. It weighed a whopping 29 ½ pounds!  This was indeed a monster lake trout!

So how did Rudd come by the photos of the fish if he wasn’t the fisherman? The Lakeville Journal reported that the fish was taken to Goderis’ Market “where it was on exhibition for several hours, and was viewed by a large number of people.” 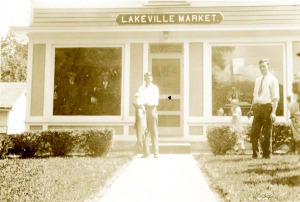 Being such an avid fisherman, I’m sure Rudd and his brother, Malcolm, also a dedicated fisherman made a beeline for the store when news of the catch circulated through town. This is how Rudd came by the photographs—souvenirs of a fellow fisherman’s triumph over a giant lake trout.

As I thought about this enormous fish and the great articles documenting its catch, I was curious to see how long Connecticut had been keeping statistics of record fish. The Department of Energy and Environmental Protection (DEEP) has been keeping records at least since 1918. Records are organized by the species of fish and indicate the weight, the location caught, the name of the fisherman, and the date caught. The earliest record that has not been broken is for a Lake Trout, but I was shocked to find the entry is seemingly incorrect.  It has the correct weight and location, but the name and date are different. Did Mr. Hall not submit his catch for recording? Are the records restricted to Connecticut residents? Hall’s catch is too close to the 1918 record, so I will be contacting DEEP to see if what the answer might be. After all, it is important to set the historical record straight, even if it does involve a fish tale!

CHS has other resources on fishing in the Nutmeg state. These include the records of the Hartford Fishing Club, East Haddam Fishing and Game Club, and catalogs of the Andrew B. Hendryx & Co., New Haven, manufacturers of “Hendryx” fishing reels. To search the collections for additional resources on fishing, visit http://www.chs.org/koha.

VivianLea Solek is an intern in the CHS Archives, a student at Simmons Graduate School of Library and Information Science, and is processing the Rudd and Holley Family Papers.