CHS got a grant last summer from the Connecticut Humanities Council to catalog and digitize 800 of its 1000+ maps. I’ve done most of the cataloging on these maps. We’ve got maps that are hundreds of years old, from the 17th century, and maps that are from the late 1990s. They vary in size, from the teeny to the huge. Some are very rare and others are pretty commonplace.

But the best map is the one I call “the murder map.” At first I didn’t think much of it, because the location isn’t even identified and it just looked like some anonymous Connecticut city—maybe New Haven? Upon closer look, however, I realized that something very interesting was going on. At the top, on Clinton Street, lies the figure of a man. Next to him are an umbrella, a cane and a pistol.The little diagrams at the bottom of the sheet show the trajectory of the bullet that killed him. And with that, I found my favorite map ever. I love a good creepy story, and the crazy life of George Colvocoresses, who was killed in Bridgeport, Connecticut, on June 3, 1872, is no exception. 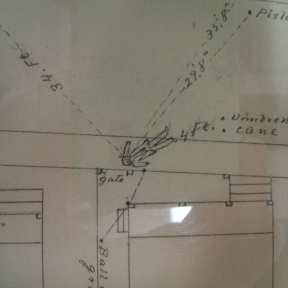 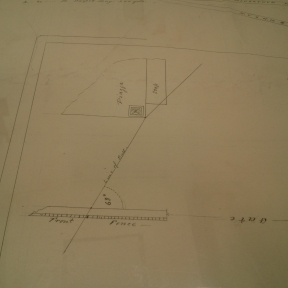 His life story, as told in Michael J. Bielawa’s book, Wicked Bridgeport, was truly remarkable, as were the circumstances of his death. Colvocoresses, or “Colvos,” as he was known to friends, was born in Chios, Greece in 1816. At the age of six, George was kidnapped and enslaved by the Turks in the Greek War for Independence. Ransomed by his father, the child was sent to the United States, where he lived with Captain Alden Partridge and his family in Vermont. George was educated at the local military academy (now Norwich University) and eventually joined the Navy, with which he enjoyed a distinguished career.*

After retiring from the Navy as a captain in 1867, he returned to family life in Litchfield, Connecticut, where he lived with his second wife. On June 3, 1872, George was traveling to New York City, first on the Shepaug Valley Railroad to Hawleyville, then the Housatonic Railroad to Bridgeport, from which point he was to catch the steamer to New York at 11 pm. He carried with him an umbrella, $8,000 in cash within a carpet bag, and a cane that contained a sword. He stopped into the Sterling House seeking supper but the kitchen was closed and he went to Ward’s Restaurant instead. After revisiting the Sterling House to return a hotel key he had forgotten to give back the previous week, he then stopped at Wheeler’s drug store to purchase paper and two envelopes. George left the drug store at 10:35 pm and headed toward the dock. He never made it—he was intercepted along Clinton Street and shot with a pistol. 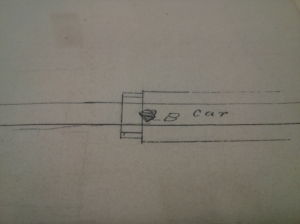 The map shows the location of his prone body on the sidewalk of Clinton Street next to his cane and umbrella; across the street are a pistol and powder horn, while the empty carpet bag is some distance away, near the dock. At the bottom of the map are two projections of the trajectory of the bullet, one from the side and one from the top. There is a second map, also hand-drawn, that depicts more of Bridgeport, showing the businesses Colvos patronized on the night of his death, the route he was taking when he was killed, and the steamboat he should have boarded. The only confirmation that this map, which does not show the location of the body or the trajectory of the bullet, is connected to the murder, is the inscription at the bottom right, which reads, “Carpet bag 300 yards south of South Ave.”

George’s killer was never caught, and though numerous theories were floated over the years to explain what happened that night, the crime was never solved. Along with the $8,000 in cash, another $80,000 in stocks was presumed to have been stolen. The money was never recovered and no one was ever charged with killing the captain. The secret of who killed a war hero, naval officer, explorer and survivor most likely died with the person who committed the crime.

*One of my favorite parts of the story is something completely unrelated to the map but illustrative of Colvos’ crazy life. After serving in the Navy as part of the U.S. Exploring Expedition (which is pretty interesting in and of itself), he was stationed off the coasts of Africa and the Mediterranean. He contracted yellow fever and appeared to have died. His body was prepared for burial at sea, and a chaplain read him his last rites. Just before he was sent overboard, another crewmember noticed the American flag draping his body fluttered just a bit with his breath, and he was saved at the last second from sure death.

3 thoughts on “The Incredible Life and Mysterious Death of Captain George M. Colvocoresses”