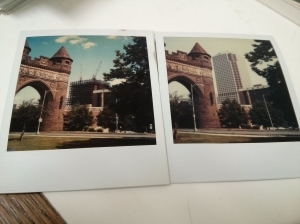 My most recent project here is to catalog photographs, prints and drawings by Hartford artist Richard Welling. I started on his Polaroids, of which there are hundreds. Welling loved photographing Hartford as it changed in the 1970s, ‘80s and ‘90s, and as a result, I’ve been playing building detective for the past few weeks. My job has been to go through a group of Polaroids of downtown Hartford and identify the buildings in them. Welling was very interested in urban renewal, that mid-twentieth century practice of razing inner city buildings in the hopes of clearing out slums and reenergizing downtowns.* With an SX-70 camera, he photographed several of Hartford’s ambitious renewal projects, often juxtaposing the old and the new. Several of Hartford’s old landmarks have since been razed, so having photographs that document their rightful place in the built landscape is priceless. 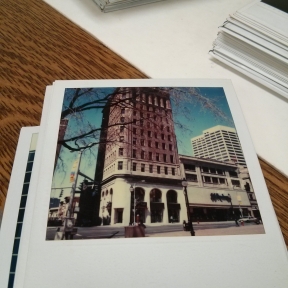 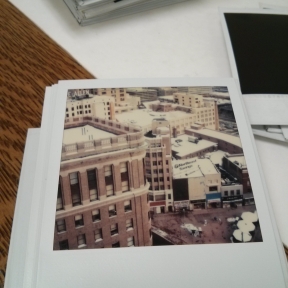 I’ve lived in Hartford (well, West Hartford) for two years. Like most people, I don’t get downtown that much unless it’s to go to something specific. I never just go downtown to hang out. Learning the names and histories of the buildings I pass on the freeway has been fascinating and has definitely made me want to go downtown and check them out in person, now that I know more about them.

*While urban renewal in the United States was nothing new (see the nineteenth-century City Beautiful movement and Depression-era Public Works Administration/Works Progress Administration), Title I of the 1949 Housing Act is cited as the major push in the urban renewal glut of the 1950s, ‘60s and early ‘70s. It promised federal funds to assist cities in clearing slums and blighted downtown areas. Discontinued by 1974, it still generated over 2000 projects in 1000 cities. (Connecticut’s New Haven received the most federal funding of any city in the country.)

At first popular with civic leaders—who doesn’t want to make a city more inviting?—urban renewal was eventually seen as somewhat of a failure in many places. Eminent domain, the ability of a government to seize private property for public use, was invoked and invoked often. Often, entire neighborhoods were razed, displacing homeowners and tenants, business owners and shoppers. Unsurprisingly, immigrants, the poor, and minorities were the ones most affected by the clearing of the inner cities. While urban renewal did “succeed” in getting rid of many slums, whether the buildings that replaced them were worth it is… debatable, to say the least. Modern architecture is not always known for being people- and business-friendly. Finally, in many cases, proposed projects did not get much past the razing-old-buildings stage, and in cities like Hartford, let’s just say there are probably too many parking lots downtown.