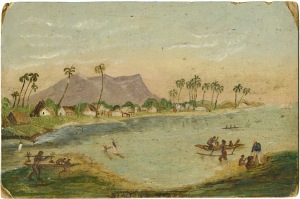 Mrs. Starr, the wife of a whaling captain created this image of Hawaii about 1855.

With the weather getting colder, this might be a good time to consider taking An Archival Trip to Hawaii, offered this Saturday from 11:00 am to 1:00 pm, free with admission to the museum. On display will be a number of objects, books and manuscripts documenting the 200-year connection between Hawaii and Connecticut.Did you know there was a Connecticut-Hawaii connection? It started when a young Hawaiian man, known herein America as Henry Obookiah, came to Connecticut in 1809, became a Christian, and was instrumental in establishing the Foreign Mission School in Cornwall. The mission’s purpose was to educate native peoples in the teachings of Christianity so they could accompany missionaries back to their native lands and act as translators or cultural interpreters.

First page of a letter from Amos Cooke to his brother-in-law Seeley. Ms 65905

At CHS there are any number of items and collections that document the connection between Connecticut and Hawaii. I have already written about Amos Starr Cooke who sailed to Hawaii in 1836 with the 8th Pioneer Company. In addition to Cooke’s letters, the display on Saturday will include letters from Titus Coan and the diary of Louisa Ely, who were both missionaries, maps of Hawaii, a Hawaiian vocabulary, 19th century books about Hawaii, the memoirs of Henry Obookiah, material about the Foreign Mission School, images of natives drawn during Captain Cook’s South Pacific tour, and a painting of Diamond Head created by a whale ship captain’s wife, seen above.

The Connecticut-Hawaii connection is still going strong. My post about Cooke’s letters home led to correspondence with a descendant of Cooke, which led to correspondence with scholars of Hawaiian history and educators in both Connecticut and Hawaii. The archivist at the Kamehameha Schools, Stacy Naipo, and her assistant Candace W. Lee , have offered to have their library assistants, their  partners at the Office of Hawaiian Affairs and college interns transcribe Amos’ letters for us (and them). This will be a great help since some of Cooke’s letters contain sentences and phrases in Hawaiian, which I would never understand. I  have also made contact with a descendant of Henry Obookiah’s family, the person who brought Henry back to Hawaii for reburial, and a scholar in California, Sandee Bonura, who is writing about education in Hawaii and is interested in Amos Cooke. The circle widens!

The display on Saturday is part of a cooperative program funded by the Hartford Consortium for Higher Education with the collaboration of CHS, Central Connecticut State University, University of Saint Joseph and the Hartford Seminary. A series of lectures is planned for April 2014 exploring the impact of American missionaries on Hawaii and the Hawaiian sovereignty movement. Stay tuned for more details.

1 thought on “An Archival Trip to Hawaii”