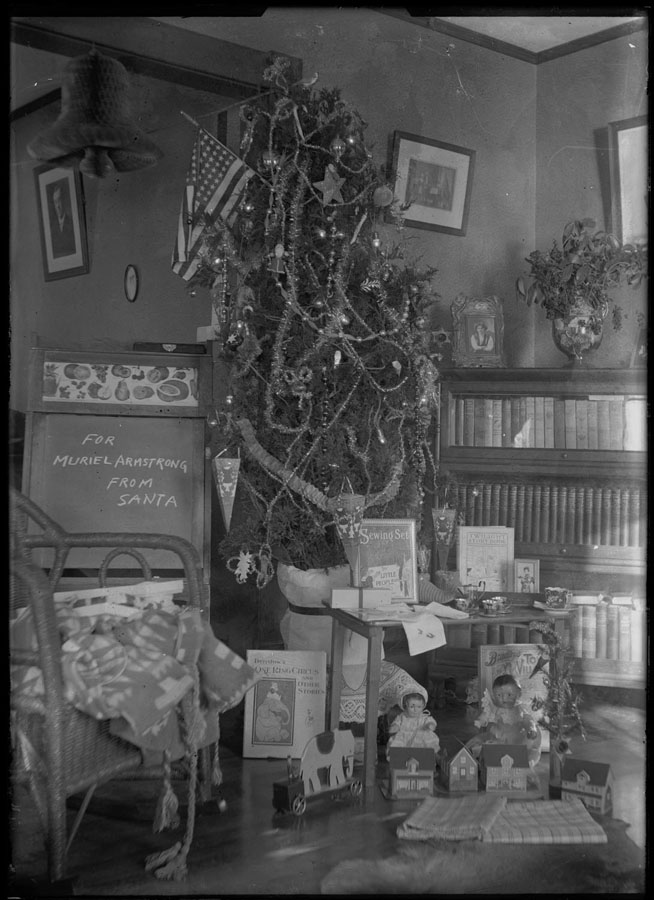 Looking at old prints and photographs in the collections of the Connecticut Historical Society, I’m surprised how little Christmas customs have changed over the years.  Though Christmas in colonial Connecticut was primarily a religious affair, by the Victorian age, it had become a family holiday, complete with presents delivered by Santa and those eight tiny reindeer.  The earliest Christmas trees were introduced in the mid-nineteenth century and begin appearing regularly in family photographs shortly after 1900.  A group of photographs from the 1910s and 1920s show how the decorations of the Christmas trees of the Armstrong family of Groton, Connecticut evolved over the years.  The earliest photos show small tabletop trees; by the 1920s, decorations include electric lights.  The piles of presents beneath these trees suggest that Christmas shopping was as much a part of holiday preparations in the 1920s as it is today.  Even before Christmas trees became popular and widespread, people in Connecticut were sending Christmas cards with season’s greetings.  The small town of Northford, Connecticut was an important center of Christmas card production during the 1870s.  These elaborate cards incorporated glitter and fringe to appeal to the taste of their customers.  Christmas shopping, decorated Christmas trees, Christmas cards, Christmas presents and family gatherings all figure prominently in my memories of growing up in Connecticut and they remain a part of holiday celebrations today.  Christmas is a time to reflect about the past, and it’s nice to know that in some basic ways, people in the 1800s and 1900s weren’t so very different from ourselves.    Happy Holidays!