Last week I was working on a short article for the CHS’s weekly history series on WNPR.org. Check out the article, “Connecticut Yankee and Millstone: 46 Years of Nuclear Power,” for a fact-based, measured, and brief history of Connecticut’s four nuclear reactors, two of which are still operating and generating nearly 50% of our state’s electrical power. It includes some great images from our collection, including photographs donated by the Hartford Electric Light Company. Continue reading here for a fear-based, hysterical, and unabridged look inside my head as I was researching the topic. It includes images that didn’t make it into the article, starting with this one:

Handbill distributed in Connecticut in 1991, currently on display in our permanent exhibit, Making Connecticut. I don’t know much about this item except that someone, presumably from Haddam Neck, was not happy. Connecticut Yankee, Connecticut’s first nuclear power plant, closed in 1996, but the five-acre storage site that houses spent nuclear fuel and high-level radioactive waste ain’t going nowhere.

Fact-based and sensible caption: View of Connecticut Yankee Atomic Power Company, Haddam Neck, 1968. Two children play by the Connecticut River in Haddam Meadows State Park. Appropriate caption written by any sensible parent: Oh, hell no. Drop the fish, we’re outta here. *Note: This image DID make it into the WNPR article, because how could it not?

Field trip! Why is the center of the fountain on fire? 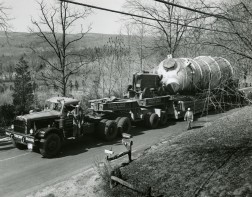 I’m pretty sure this is the steel container they used to transport the Incredible Hulk when they captured him that one time, and not the steam generator on its way to Connecticut Yankee in 1966. Pretty sure.

Connecticut Yankee reactor containment building under construction. A valuable historical record if only for the ’64 Mustang.

A bucolic scene. With his unique line drawings, Connecticut artist Richard Welling could make anything look poetic, from highway construction in Hartford to a nuclear plant in Haddam Neck. Put your mind at ease and plan to visit our new exhibition of Richard Welling’s work, opening in the fall of 2014.