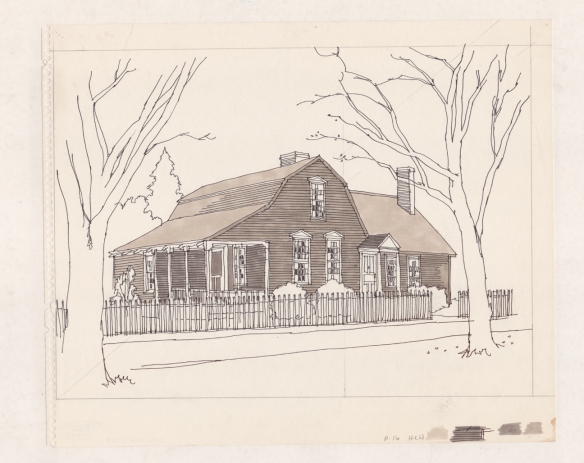 In 1976, in conjunction with the nation’s Bicentennial celebration, Richard Welling produced a slim volume featuring twenty of Connecticut’s most historic houses. From late 1975 through the early spring of 1976, Welling was on the road, crisscrossing the state, sketching buildings that ranged in date from Colonial times through the Victorian era. The book came out in May, and my parents bought a copy, which they proceeded to use as a guidebook to their ongoing exploration of Connecticut, taking me along with them on many of their excursions. We had already visited some of these houses, of course—the Buttolph-Williams house in Wethersfield, the Nathan Hale homestead in Coventry, the Harriet Beecher Stowe house in Hartford—but Welling’s book took us farther afield to the Henry Whitfield house in Guildford, the Dr. Alexander King house in Suffield, the Hempsted house in New London, and many others. I don’t think it ever occurred to me at the time to wonder about the artist whose engaging drawings inspired our investigations. But when CHS acquired the contents of Richard Welling’s studio in 2011 and 2012, I welcomed this particular set of drawings as old friends, and realized that Richard Welling had once helped to inspire my own interest in Connecticut history and architecture. As Welling said in his introduction to his book, “Connecticut, you are a grand little state!”