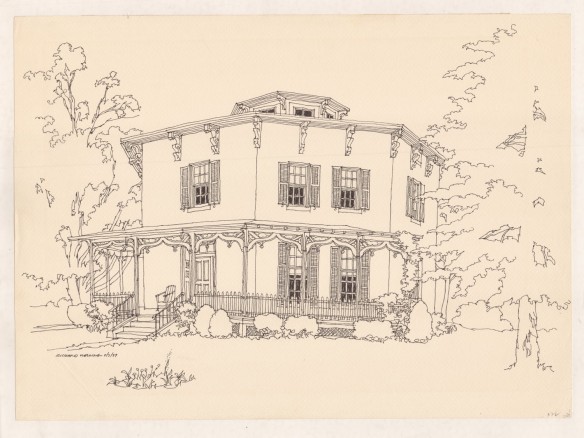 An “Octagon House” is just what it sounds like: an eight-sided dwelling. Octagon houses were something of a fad in 1850s America. They were promoted by a New York phrenologist names Orson Squire Fowler, who believed such houses were cheaper to build, easier to heat, and cooler in summer. Octagon houses are scattered all across the United States from Maine to California. Tiny Portland, Connecticut has not one, but two octagon houses, and they are located next to each other, at 26 and 28 Marlborough Street. They were built in the mid-1850s for Joseph Williams and Gilbert Stancliff. The material used, not surprisingly, was Portland brownstone. It’s sometimes said that the twin houses were built for two brothers, but obviously this was not the case. Joseph, however, was married to Laura Stancliff, presumably Gilbert’s sister. It is also not surprising to find that Gilbert worked in the Portland brownstone quarried; Joseph, however, was a shoe merchant. Always attracted by anything quirky or unusual, Richard Welling probably photographed and drew the octagon house pictured above during the 1970s, when he was working on a book about historic houses.  It’s most likely somewhere in New England, perhaps even in Connecticut, but I’m not sure where.  If someone knows, I’d love to hear from you. To see more drawings by Richard Welling, check out the new Richard Welling Collection in eMuseum, the CHS online museum catalog.