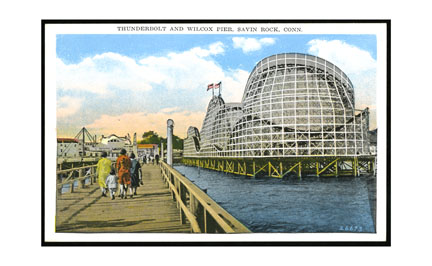 I didn’t really appreciate postcards until I began reading what was written on the backs of the cards.  Most postcard collectors like their cards in pristine condition, unused, never sent, but I prefer those that have been through the mail, carrying messages between friends and family members.  “Who said we couldn’t find our way?” a woman named Jennie wrote to her mother in Taftville from Savin Rock in West Haven.  “We got here alright so don’t worry. We were on a roller coaster even higher than this one.” Maybe Mom didn’t worry about Jennie getting lost on the way home, but she may have worried about her riding that giant roller coaster. Messages on other postcards from Savin Rock talk about the fabulous seafood dinners, the bathing beach, and the hotels, where visitors would come to stay for a week or more while enjoying the delights of the Connecticut shore.  In its later years, the amusement park at Savin Rock fell into disrepair, and it was demolished during urban renewal in the 1960s. The Connecticut Historical Society has thousands of postcards in its collections, some with messages and many more without.  All may be viewed in the Research Center at 1 Elizabeth Street in Hartford, Thursday from 12-5 and Friday and Saturday from 9-5.  You may not only find pictures of your town and your favorite Connecticut attractions; you may also find out what people thought of them when they visited them in years gone by.