Sometimes the genesis of a blog is a current news story that has obvious historical parallels. Then again, a recent acquisition can certainly get my creative juices flowing. But once in a while I just like to slowly walk through collections storage, drawing inspiration from the many fabulous objects that help us connect to our past.This week I came across a pair of small terrestrial globes that were manufactured specifically for classroom use. They illustrate an interesting family manufacturing history and provide another example of Connecticut’s long tradition of support for public education.

Classroom globe manufactured by Holbrook Apparatus Mfg. Co., mid-1850s. Thousands of these globes were purchased by schools throughout the country. CHS 1981.42.7

The story begins with Josiah Holbrook (1787-1854) of Derby. A Yale graduate (Class of 1810), Josiah was interested in farming improvements (he even started what could be called an agricultural college, though it did not succeed financially), geology, and both child and adult education (he was a national leader in the lyceum movement). Josiah also showed a strong interest in all types of scientific and teaching tools and began manufacturing them in the 1830s. Among his particular interests was the use of globes as part of classroom instruction, so before long he started constructing relatively inexpensive globes of different sizes, which became increasingly popular among educators. Josiah lived variously in Massachusetts, Pennsylvania, New York and, finally, Washington, DC.  Sons Alfred and Dwight, now living and working as educators in Berea, Ohio, (Josiah’s father had invested in Western Reserve lands after the Revolution) oversaw production of the scientific and educational instruments.

Upon Josiah’s death his son Dwight returned to Connecticut, establishing the Holbrook School Apparatus Co. in 1855. Globes, orreries, gyroscopes and other scientific and educational devices were manufactured by the new firm. While the company offices were located in Hartford much of the actual manufacturing was done by inmates at the nearby State Prison in Wethersfield. The state contracted out inmate labor, the proceeds of which went to support prison operational expenses, part of the strict “Auburn System” of prison administration popular at the time. Various firms employed convict labor in manufacturing barrels, boxes, clothing–even cigars—at the prison.

The state prison at Wethersfield, opened in 1827, was patterned after the fortress-like Auburn State Prison in New York. Lithograph by D. W. Kellogg, 1840 CHS 1840.13.4 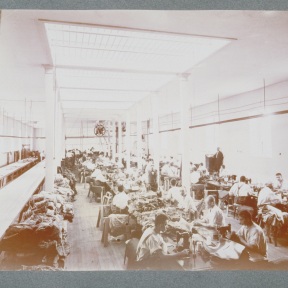 Prisoners working in the sewing room made or repaired clothing.

The firm quickly prospered when, in 1855, the Ohio School System purchased 11,000 Holbrook globes for schools across the Buckeye State. By 1860 more than a third of Connecticut schools had purchased Holbrook globes for their students. Dwight’s son Charles W. Holbrook carried on the family business in the ensuing decades until, by the early 20th century, a series of company mergers finally led to the disappearance of the Holbrook name from globes.